I find myself with a bit of a bee in my bonnet. And interestingly, the Scotland vote for nationalism versus separatism today is an unusually apt metaphor.

I am a Licensed Marriage and Family Therapist. I belong to AAMFT which in turn gives me membership in my state to CTAMFT. I love being a part of this state’s leadership, I love the information I glean and the ability to help serve MFTs and other mental health professionals. I’m one of those “insider” kind of gals.

Today, AAMFT is proposing a national structural change which will potentially take away everything that I love so much about CTAMFT. It is proposing to dissolve state affiliations and pull all funds to the national pool, presumably to better distribute them across some states which have a smaller membership or smaller pool of resources. As a member in a well-funded state, I have some real concerns about what this will mean to my actual experience here. AAMFT does not seem to want to hear this even though they have asked us for our input. I put my personal feelings out there recently only to be met with a disconnected response by Michael Chafin, the current president of AAMFT. (see below) 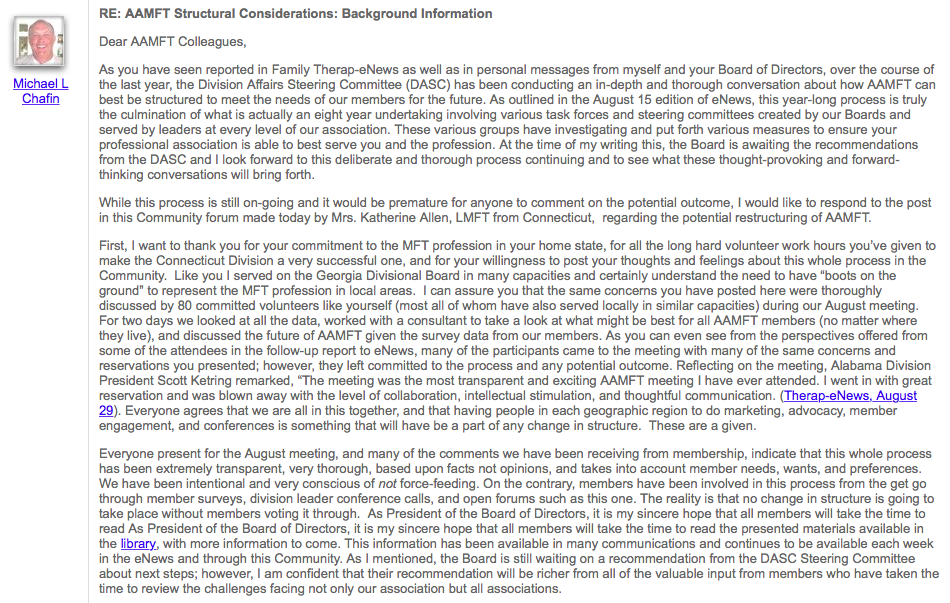 His comments to me were inaccurate and incomplete, meant only to reinforce the reality distortion field AAFMT has attempted to establish.

Remember New Coke? A few people in a board room thought up the great idea of introducing an improved Coca-Cola..remember how that fared? It bombed. Coca-Cola Inc. didn’t consider the totality of their action: they were motivated by the statistical reinforcement of select focus groups’ opinions. AAMFT is blundering into this same territory.

Seeing how this failed attempt at a reasoned conversation is going, I will rely on the tools of my beloved MFT profession to appeal for understanding from AAMFT.

If I am the client in this matter and I am letting you know that regardless of how you intend to have the information heard, I do not hear it that way, then it is your responsibility to meet the client where the client is. Slow down and try again, please stop re-trumping the party line and dismissing how I feel. I don’t trust this process and you keep telling me I need to. Do better. Sell it to me differently.

I think I understand, just a teensy bit better, how Scotland feels today. And I hope all of our results are healthy and productive.