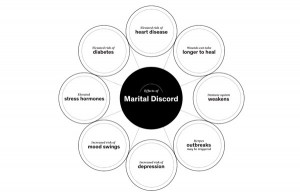 The New York Times Magazine had an interesting article this past weekend titled “Is Marriage Good for Your Health?” and as many can surmise, yes, marriage does have many positive side effects. If you have recently looked into purchasing health or life insurance, being married has a major impact on the rate that gets quoted (i.e: married rates are lower than single ones). This article was particularly interesting in how it goes a bit further and looks at the effect of a bad marriage, too.

I was at the CTAMFT Annual Conference on April 9 and the keynote speaker was Dr. Sue Johnson, the author of “Hold Me Tight” and the creator of Emotionally Focused Couples Therapy in 1985. My insufficient summary of her field of study is that of adult attachment, especially after trauma.

Researchers have also started to examine the salutary health effects of social relationships, including those of a good marriage. In one recent study, James A. Coan, an assistant professor of psychology and a neuroscientist at the University of Virginia, recruited 16 women who scored relatively high on a questionnaire assessing marital happiness. He placed each woman in three different situations while monitoring her brain with an f.M.R.I. machine, which offers a way to observe the brain’s response to almost any kind of emotional stimulation. In one situation, to simulate stress, he subjected the woman to a mild electric shock. In a second, the shock was administered, but the woman held the hand of a stranger; in a third, the hand of her husband.

Both instances of hand-holding reduced the neural activity in areas of the woman’s brain associated with stress. But when the woman was holding her husband’s hand, the effect was even greater, and it was particularly pronounced in women who had the highest marital-happiness scores. Holding a husband’s hand during the electric shock resulted in a calming of the brain regions associated with pain similar to the effect brought about by use of a pain-relieving drug.

So then how do we redefine the “marriage effect” in a more realistic light? So many couples that seek therapy are under the impression that staying together “for the sake of the kids” is the best choice, “Our parents did it and so should we”. Is it best to change the relationship first, to do the hard work of therapy, before considering leaving a marriage? Yes, absolutely. An in-tact healthy family is still the best model for successful growth, health and stability for all members. But abuse and violence are very different situations and must be handled differently as well.

The new research highlights this exact experience. Toxic environments; from the water and food we consume to the office to the home and the relationships within them, have real and lasting effects on our brains and well being in every way. Discord cannot be ignored.

Things aren’t always what they appear to be from the outside, just look at the MRIs.