I have been pondering this post for some time. As a therapist who is focusing much of my information sharing in these posts as reflections on events in the media, I have been thinking about some of the reality TV shows and their therapeutic integrity and appropriateness. 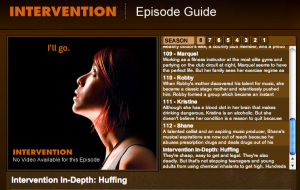 Take A&E’s Intervention. An amazing show, filled with the real pain and trials that addiction submits to everyone in the system. There is no such thing as an addict in a vacuum, loved ones and the community are ultimately involved and harmed in the cycle of addiction no matter how you look at it.

They have introduced some new episode formats, like the one highlighted in the pic here, that are in-depth looks at specific types of drug classes and their impact. This particular one highlights Huffing, something that astoundingly far too many parents are not educated about or aware of. This was a powerful episode featuring not only success stories but some tragic endings as well.

I rate Intervention with 5-stars as far as its content, therapeutic viability and integrity and the educational information that is shared.

Next there is the new A&E show called Hoarders. Also touted as a therapeutic type intervention show focusing on the very real and shame-surrounded illness of hoarding. I find the show to be a bit less sound in its strength regarding therapeutic education and demonstration and a touch too voyeuristic as far as the many repeated scenes of piles of trash and belongings can be. 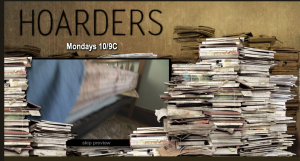 Although I praise A&E for their bravery in shedding light on this very real and very serious illness, I only would give it 3.5-stars due to the mild gawk-fest that it can sometimes feel like and the fact that some of the “experts” are nothing more than Professional Organizers. I would like to see more credentialed therapists and fewer Got Junk? garbage truck shots.

I would also rate the show higher if at the end, instead of posting a message along the lines of, “with the aftercare funds provided, person X plans to attend therapy”, if it stated that they are currently working in therapy. As a trained addiction professional, I see “funds provided” as a pitfall for the afflicted to go out and replenish some of the regretted losses. The lure of the old way, the pull of the “familiar bad” is more powerful than any of us truly admits.

NBC’s The Biggest Loser empire is obviously a huge money making success, but again therapeutically, I believe it has taken far too long for this show to become serious about the very real illness of overeating, an illness that is exactly the same in its severity and life threatening potentiality as anorexia or bulimia. But our society still views individuals with this disorder as just being weak or lacking in self control, being lazy or sloppy or stupid (none of which are true). Ask any severely overweight person if they wouldn’t give anything to be healthy and the answer is a universal yes.

One particular episode I recall had the contestants battling over a “challenge”, and the challenge consisted of a huge banquet table piled high with all of their self-admitted favorite foods, their achilles heels, and the contestants were filmed struggling between their desire to win, their knowledge of being filmed, over the desire for their drug. Yes – drug.

Imagine if A&E’s Intervention used this same gimmick, and had an alcoholic presented with a table overflowing with their favorite drink, or a cocaine addict presented with a table covered in piles of glistening white flakes. The outrage would be epic, akin to torture and abuse, if not actually illegal then outright abysmally immoral.

In real life, real studies have been done somewhat along these very lines and in all cases when a severe addict was presented with the choice between $10,000 in cash or immediate access to the drug, invariably they chose the drug every time. Remember that a major tenant of addiction is immediacy.

I understand, by NBC’s trailers, that the show is now touting itself as “the only show on TV that is focused on saving lives”. While I admire this change of characterization, please refer to the above shows first and possibly rephrase that representation.

Just when you think the realm of reality TV has sunk to its lowest, along comes MTV’s Jersey Shore. The show is just actors playing out a ridiculous and insulting stereotype, there’s nothing “reality” based about it at all. Just to state the obvious, it has no therapeutic content or claims as well. There was the incident, though, where “Snooki” was punched in the face by a man in a bar, I could create an educational post about domestic violence out of this. Seriously.

Visit msnbc.com for breaking news, world news, and news about the economy

Needless to say, neither of the final 2 shows even qualify for my rating scale, it doesn’t go that low. As a person committed to helping real people make lasting change to better their lives, I cannot stand by quietly with public displays like these.

Let me know your thoughts.