In the final installment of PBS’s “This Emotional Life” series, episode 3 “Rethinking Happiness” focused on happiness, rejuvenation and misperceptions regarding how beliefs that are sometimes associated with happiness may not actually influence happiness at all. Why is the one thing we all crave so elusive? 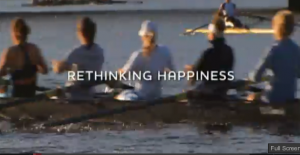 Happiness, at the core, is a state of mind, a choice, and the debate ensues regarding money and its effect. I fall into the camp of belief that money is only associated to happiness based on the degree of comfort in one’s surroundings that it can create, not that it inherently causes happiness in and of itself (picture curling up in front of a fire with stacks of $20s).

But what about serious depression? I mean, if Chevy Chase, who has lots and lots of money, has trouble finding the correct anti-depressant for 6 years, what does that say about money’s role and strength regarding happiness?

In the end, it is the quality of our relationships that influences happiness, which so perfectly brings us circling back to episode 1, and so it goes.

Be prepared for MFT3 to refer to this series often regarding the multitude of topics that were so beautifully illustrated by PBS. I hope you were as moved by it as I was.